Those DREAMers who used fraudulent passports and/or visa to enter the United States have been wondering if they will be approved for DACA and eventually for RPI status.  Well, while researching the forums of DREAMers, I have come across a case in which an individual who did this has already been approved.  This is a process that maybe very familiar for those in the undocumented community.

How does the process work?  Everyone knows that visas to the United States maybe somewhat difficult to obtain, but they are fairly easy for wealthy people.  Once you get the visa, renewals are even easier, and so are adding family members.  So this DREAMer (I am highlighting a typical example but there are many other people discussing similar cases), whose parents were already in the United States illegally, paid an undisclosed sum of money to an American visa holder, who applied to add him to his visa using a fictitious name and documents.  Then he traveled to the US and since he was a child, no fingerprints or photographs were taken.  Upon arrival, he simply reverted to his actual identity.  In his DACA application, since the US Government had no way to check this, he simply declared that he entered without inspection, and what I found interesting is that he listed the Place of Last Entry into the U.S. as Washington, District of Columbia.  After the typical four-month period, he was approved without any questions.

Please click on the images below to read how the applicant's story: 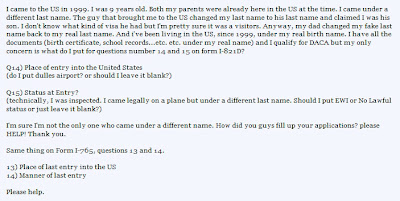 You will need to click on the image below to see what he actually did and an update on his approval:

So how did the USCIS approve him?  Well, as some of the USCIS union members have been pointing out, the agency is in a mess and there is tremendous pressure on them to rubber stamp immigration applications.  So, they really are not checking things very well.  To somehow claim that you entered the United States in Washington, DC (I even read of people listing Miami) without inspection is unusual (most people tend to enter through the land border with Mexico), but looks like the adjudicating officers are under too much pressure to approve applications because of the workload.